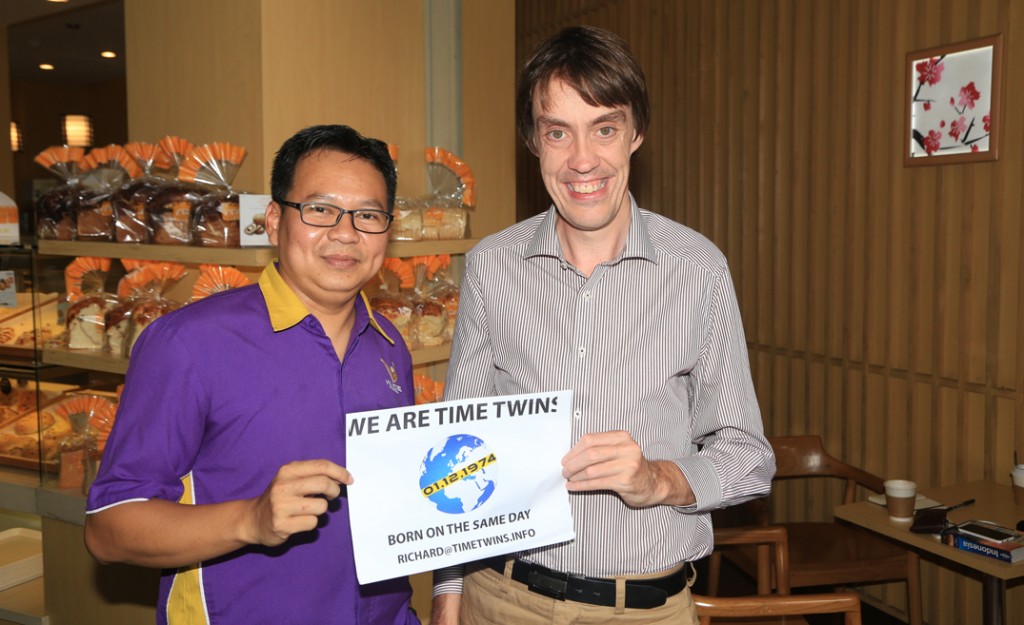 Back in November 2012, on a rainy, grey day in London, I happened upon a website featuring an Indonesian Time Twin – Irawan –  a  hotel executive living in Bandung .  With our birthdays approaching, I sent him a birthday card, wishing him all the best and explaining the nature of the project.

Just over a week later, I received an email in reply: the first Asian Time Twin I heard from. His email started “I’ll be happy to join the Time Twins project”.

It went on to outline the cultural, culinary  and historic attractions in his home town and he suggested that I should try playing the angklung when I visit Bandung. Even though I didn’t know what an angklung was at that point, it was a wonderful invitation.

Yesterday, sixteen months after that first contact, it was great to finally meet Irawan at the newly reopened Braga City Walk mall in the centre of Bandung. His role as General Manager of the three Vio Hotels in Bandung (the Hotel Vio Pasteur, the Hotel Vio Cimanuk and the Hotel Vio Surapati) means that he is a man in constant demand, especially during the busy Easter weekend period, when tourists from Jakarta and Malaysia flock to Bandung for shopping and relaxation. Despite this, I had the pleasure of sitting and talking with him for most of the morning, learning about his beliefs;  his career;  his experiences living across Indonesia and overseas; Sundanese culture; life in Bandung and how his priorities have changed in recent years.

When we met again today, I had the honour of meeting Irawan’s family. At the Saung Angklung Udjo I got to learn the rudimentary basics of playing the aungklung – a traditional Sundanese bamboo musical instrument and along with Irawan and his family formed part of a beginners angklung orchestra.

My sincere thanks go to Irawan and his family for their hospitality, time and warmth during this wonderful weekend.