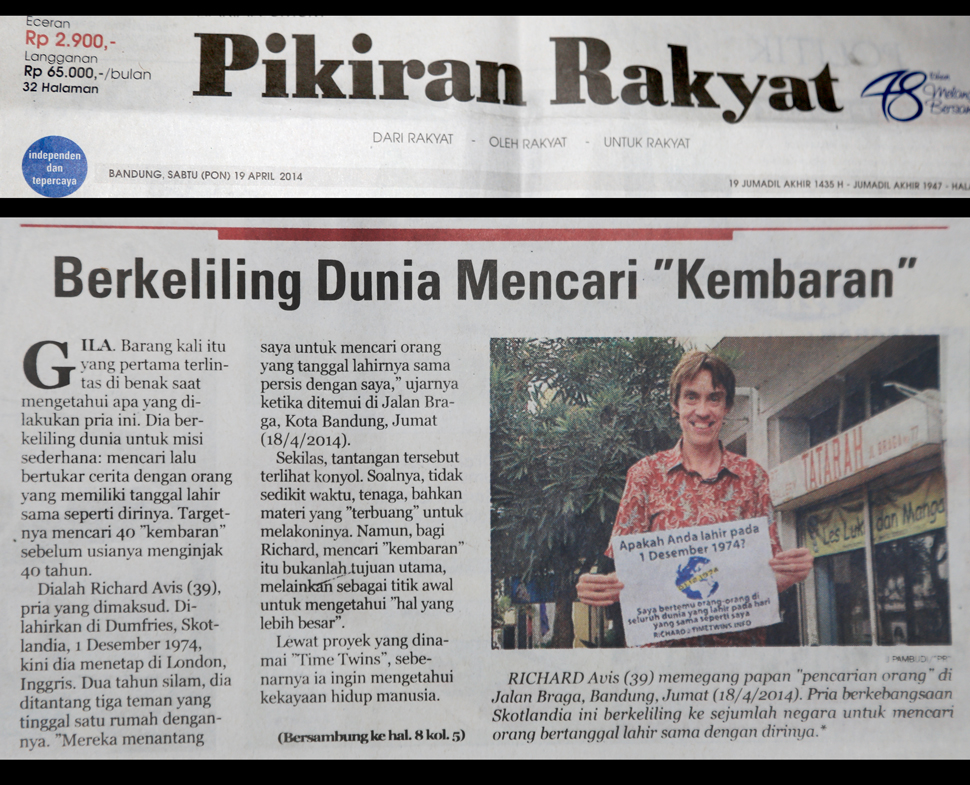 Yesterday I received an unexpected SMS on my Indonesian cellphone number. It was from a guy called Joko. I had spent a few hours earlier in the morning Tweeting about my arrival in Bandung, the capital of West Java, and promoting the Time Twins project.  It transpired that Joko is a journalist from Pikiran Rakyat, a daily newspaper based in Bandung with a circulation of 150,000 in Bandung and West Java.  Joko’s editor had seen the Tweets and tasked Joko to track me down.  A great bit of detective work on his part, as my number isn’t published anywhere!

We met over a coffee at the local Starbucks. Joko seemed interested in the project, asking us questions for about an hour and watching the Time Twins talking about the project video.

This morning’s mission became finding the newspaper.  Clearly, Pikiran Rakyat must be a popular title as the Indomarets and Circle K’s in central Bandung had all sold out.  Luckily, the Pikiran Rakyat’s office was close, but unluckily, nobody seemed to know exactly where it is. Finally, after many wrong turns, retraced steps and directionless wandering, we saw a group of men reading a newspaper on a billboard – a billboard with Pikiran Rakyat on it.  As this media attention is still quite a new experience for me – I couldn’t resist standing next to the frontpage and pointing  out to the readers the resemblance between the man in the photo and the man standing next to them!

For those who don’t speak Bahasa Indonesia, the article says:

Looking around the World “twins”

Crazy. Perhaps that is what first comes to mind when you know what this guy is doing. He  is travelling around the world on a simple mission: seek and swap stories with people who have the same date of birth as him. The original target is looking for 40 “Twins” before he is 40.

The man in question is Richard Avis (39) He was born in Dumfries, Scotland on 1 December 1974 and lives in London, England. Two years ago, three of his friends challenged him. “They challenged me to meet 40 people born on the same day as me” he said when we met at the Jalan Braga, Bandung, on Friday

At first glance, it looks ridiculous challenge. You see, not a little time and effort has been “spent” to practice it. However, for Richard, look for “Twins” was not the main goal, but rather as a starting point to determine “greater things”

Through the project, called “TIme Twins” he wants to know the richness of human life.

“With the same number of days that have been spent on this planet, what kind of life do these people lead? What are their greatest achievement?” he said

Talking about the man, of course, can not be separated from the culture around him. Cultural context ranging from values, norms, manners is key in understanding of a person’s behaviour.

Since the trip began, he has visited 13 countries in Europe, America, Australia and Asia. So far, he has met 31 “Twins”, 16 men and 15 women. Two of them he met in Indonesia: in Bali and Makassar.

In search the “Twins”, Richard did some research as well as a  creating a simple sign. In addition to the official website that he created, the project was also distributed to a number of social media, like Facebook and Twitter. He estimates that in Indonesia, there are 9800 people who were born on the same day as him, 5,500 in Palau 3800 Java and outside Java

“We have learned a lot of interesting things. Though the people have the same birth date, there are differences in ethnicity, gender, religion, occupation, and social background. We exchanged stories about their respective lives. Everybody has a different story and a surprise” he said

In Bali, for example, he met with someone who works as a tour guide. From him he learned about  Balinese culture and the intricacies of Hinduism. However, the steps are not limited to swapping stories. “I’m also trying to help their lives.  “The Bali “Twin” worked as a tour guide, and I promoted his name on my site. So, if there are foreign tourists who come to Bali could use his services” said Richard.

In Bandung, the plan is that Richard will meet a “Twin” in the next few days. After Bandung , he is going to Malaysia.

However, he said, from several countries that have been visited, Indonesia is one of the the privileged. Diversity of cultures, ethnicities, and backgrounds contribute to its own story. One of the simple things he has witnessed is religious tolerance. “I was surprised because it did not think there would be an Easter holiday here, as it is in a country with a Muslim majority,” he said.

He finds all elements of how people socialize interesting. In Bandung, for example, he was amazed by the hospitality. Almost every person he encountered gives a smile: “My face starts to ache, as everyone’s smiles all invite more smiles “ he said, jokingly.